Oregon Growers Analytical specializes in potency determination of cannabis and cannabis related products. Our potency profile includes concentrations of 5 major cannabinoids: Δ9THC, THCA, CBDA, CBD, and CBN. These cannabinoids are typically present in the plant at higher values than other cannabinoids and have known physiological attributes. Our potency values are all backed by certified reference standards from reputable manufacturers like Cerilliant, a Sigma-Aldrich Company. Because certified reference standards are critical to ensuring chromatographic purity, OG Analytical only reports on compounds that standards are available for.  We plan to add additional cannabinoids, such as CBGA, to our potency profile as reference standards become available.

Cannabis is a very complex plant.  It produces hundreds of compounds, including cannabinoids, terpenoids, and flavinoids, alongside traditional plant lipids, etc.  Interestingly enough, raw (or cured) cannabis plant material contains almost no THC or CBD.  Instead, it produces carboxylic acids, such as THCA and CBDA[1]. These compounds have no known psychoactive effects and their own unique pharmacology, making them of increasing interest to the medicinal community[2]. The acid compounds are volatile and easily convert to their neutral counterparts under heat and light[1]. This is why consumers smoke, vaporize, or cook cannabis to "activate" it[3]. Consuming it raw will induce a much different effect than heating it during consumption[2].

Chromatogprahy
OG Analytical uses High Performance Liquid Chromatography (HPLC) to screen for cannabinoids because it allows us to see the acid compounds as well as the neutral, a task GC cannot perform. Gas Chromatography (GC), an alternative method widely used for cannabis analysis in Oregon, uses heat during the analytical process, causing the carboxylic acids to break down. Due to decarboxylation during analysis, GC is unable to give an accurate picture of carboxylic acid cannabinoids, the precursor to THC and CBD. This makes it inappropriate for testing products that will not be heated prior to consumption, such as edibles, topicals, and tinctures, and limits it's ability to accurately chromatograph THCA, CBDA, CBGA, and other carboxylic acids.  HPLC, on the other hand, uses high pressured liquid solvents which don't alter the cannabinoids during analysis[1]. This allows us to chromatograph a full potency profile of medibles, topicals, and tinctures, including glycerin-based products.  HPLC is the only method listed in the AHP Cannabis Inflorescense Monograph as being fully validated in accordance with ISO 17025 and the FDA[4].

Results you can trust. 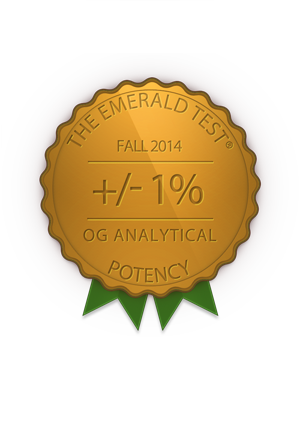 In September of 2014, OG Analytical participated in The Emerald Test, the first ever cannabis potency proficiency test.  We achieved results that fell within 1% of the known value, a strong demonstration of our accuracy in Δ9THC testing. Out of 19 results reported across the US, we tied with two other labs as the top in the Nation, and scored the highest in the State of Oregon. For more information on The Emerald Test, please visit http://www.theemeraldtest.com.